Can we learn to grieve well?

My father passed away in Guyana a month ago aged 81 years.  This is not the first time I’ve had to cope with losing a member of my immediate family; my sister Nirvana died suddenly over a decade ago and that was hard.  And my father?  Well most of my life my father had infuriated me but nonetheless we were close and I was expecting that his death might hit me hard.

But something has happened since dad’s death.  It started when Nirvana died but I have experienced the most profound shift in this last month.  The morning after he died, I felt strangely vulnerable and alone as if I had lost my most important source of protection.  Who’s going to look out for me now?  But very quickly these feelings started to transform…

I have never been afraid of dying and in fact, have often felt some fascination with understanding the ‘what next?’  Many years ago I read ‘The Tibetan Book of Living and Dying’ and this was the initial catalyst.  As I read I felt as if I was coming home, as if what I’d always known was being validated.  I’m now reading Anita Moorjani’s ‘Dying to be me’ which is further validation of that inner knowing.

So what has brought about this shift?  I believe that much of it is to do with the way in which death (at least my father’s death) was treated.  My father was a Hindu so he was cremated but his Guyanese cremation was nothing like I’d experienced with my sister.  Hers was a sanitised process in a crematorium in Surrey, the coffin disappearing into a hole in a wall, ashes (whose? Was it really her?) delivered to my doorstep in an urn a few days later.  Being born and brought up in England for most of my life this is what I had expected.  But when dad died, the ‘rawness’ of the ensuing cremation process was a shock.  Everything was out in the open.  His body was placed on a pallet and carried up to the crematorium foreshore while mantras were chanted.  Death was out there for everyone to see.  We could see his body.  It wasn’t hidden in a box.  My brother helped to build the pyre and lay my father’s body onto it.  The fire was lit and we stood under the baking tropical sun and watched the flames engulf his body.  His body continued to burn for the rest of the day and into the night.  The next morning, my brother and I returned to the foreshore and chanted mantras while we scooped up his ashes (and even some of his intact bones which the crematorium priest later ground up!) to take to the sea.

This process affected me profoundly.  Back in the UK, when I recounted this story to some of my friends they recoiled in horror and offered sympathy for the ‘trauma’ I’d been through.  I almost bought into this story myself until I stopped and realised that it hadn’t affected me in any way traumatically.  In fact, what I had witnessed and engaged in had felt indescribably poignant and absolutely right.  It had felt like the best way to express gratitude and respect to this body, this container that had faithfully housed my father’s spirit throughout his life.

It also greatly affected my ability to let go of my father– I have been able to let go of his physical ‘container’ almost as if he has moved house and I now am able to visit him in another place.   In this ‘other’ place, I’m getting to know him afresh and without the baggage that inevitably clouds all of our relationships (especially those with our family).  Without the ‘he said this’ and ‘he did that‘ stories.

We returned home after the cremation and I lay on my bed exhausted and drifted into a deep, dreamy sleep in which I told him how much I loved and missed him.  I was woken by something fluttering against my face as a tiny passport sized picture of him that I’d placed on my bedside table drifted onto my pillow.

My first inkling that dad is still very much with me came as I ran along the sea front two days after his death.  As the sun rose, I felt his presence strongly as it was the place that he loved to run and then walk as he got older and his joints began protesting.  Even at 5am it was hot and humid and felt like breathing butter but he was there with me and I had a huge smile on my face as I ran into the rising sun with his voice whispering in the wind, urging me on.

I know he is with me.  I feel it everywhere – when I work I do so with renewed conviction, when I run I feel stronger, fear is easier to confront, love is stronger, I feel a stronger sense of who I am, my father’s daughter, me.

In 1969 Elizabeth Kubler-Ross introduced the 5-step theory of grief and loss in which acceptance is the final stage.  Maybe we would be better placed to reach this final stage of acceptance much more quickly if we learn to let go lightly which I have done by using my own 5 steps.  Maybe they might offer you some guidance and solace if you have just lost someone you love

Most of all, know what makes you happy and do it without guilt – that’s what our loved ones would want for us after all. 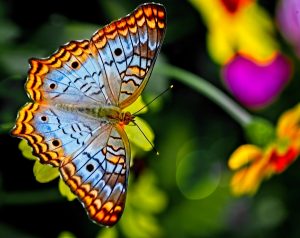